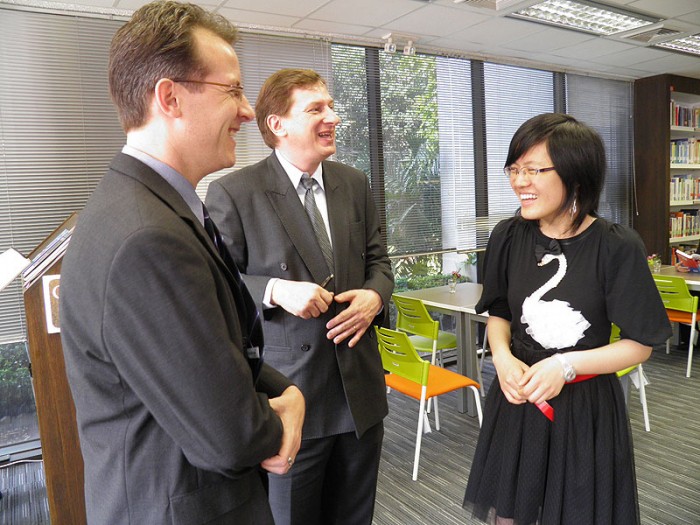 Shortly after the 12th BCC Open, I talked with Women’s World Champion GM Hou Yifan about her performance and impressions during her first-time visit to Thailand.

AK: Let’s talk about the tournament. How did it go for you?

HY: At the beginning I played decently, but then, after half of the tournament the schedule changed from two to one game per day. Somehow that was bad for me. In round six I actually had a lost position [win with white against German FM Martin Voigt], in another game I blundered, and in my last game I also didn’t play well [draw with black against Filipino Sander Severino].

AK: Is there a game that you are very satisfied with?

HY: Maybe the third one [win with black against Iranian GM Shojaat Ghane].

AK: How did you prepare for the tournament and each game?

HY: Before this tournament I just finished the national championship in China. There I played in the men’s section, although there is a women’s section too. Shortly thereafter I came here, so I didn’t have any special preparation. Before each game I sometimes prepare and sometimes just relax.

AK: Since this is your first time at the BCC Open, please tell me some of your impressions about this venue, the organization and the competition.

HY: I really like this place. The hotel is very comfortable and convenient because it’s in the city center. The tournament organization is very good for the players. Actually I didn’t have any problems, but if there were any the organizers could find a solution quickly. Concerning the level of competition: although the ratings aren’t that high, the players are strong and many of the young players show great potential.

AK: You played against some strong opponents here, most notably GM Nigel Short. What can you still learn from players of his quality? Would you ever consider hiring someone famous – someone like Garry Kasparov – to be your chess coach?

HY: Of course when you play against other GMs there is always something to be learned. I have played against Nigel Short several times – and have lost against him three times. But I remember I beat him in 2008 in Wijk aan Zee. As for your second question, I haven’t had such an opportunity yet and haven’t really thought about it. In China we have coaches for the national teams. But I don’t have a private coach.

AK: Your mother has accompanied you to Bangkok. Please tell me about her role in your life.

HY: My mother usually travels with me and gives me her support. My parents are also my friends. We can talk about anything. They help me with my everyday life, and together we feel very comfortable.

AK: Since your arrival in Bangkok you have been getting much attention. At Bangkok’s Government House you met Thailand’s Prime Minister Yingluck Shinawatra, other important politicians, and many chess fans want to see you play and ask to take pictures with you. How do you manage all of this attention?

HY: Usually I don’t think about this kind of thing too much. It’s good to see that people who don’t play chess become interested in the game. It’s fine when people would like to take a picture with me after the game, just not during the game [laughing].

AK: What do you like to do in your free time?

HY: Sometimes I like to travel when I’m not playing competitive chess. I also enjoy reading, swimming, listening to a great variety of music and watching some television series and movies. When I was young I didn’t like to watch movies that much, but recently I like it more. My favorite film at this point is Shawshank Redemption. [Maybe because the main character likes to play chess?]

AK: What are your impressions of Bangkok? Have you had a chance to go sightseeing?

HY: Before the tournament I went to several places such as a crocodile farm, temples, the Royal Thai Elephant Museum, and Wat Pho where I saw the Reclining Buddha. I appreciate the overall environment here and especially Thai fruits, for example coconuts, durian and mangosteen. I have read that if durian is the king of fruits, then mangosteen is the queen. I have also tried some Thai dishes. Some of them are similar to Chinese food, just spicier. I talked to some local people who are connected to the tournament. I found them to be very hospitable. And when I went sightseeing, local people helped me to find my way around. Thai people are so polite and greet me with the Wai. During Songkran I went out for dinner, people splashed me with at least three bottles of cold water and put powder on my face. Not only children did that but adults too!

AK: Your English is really good. Where did you learn to speak English?

HY: When I’m in Beijing and don’t play a tournament or have other business to take care of, I sometimes go to a popular English language school there.

AK: Do you have any intention to further your studies?

HY: I’m planning to enroll at Beijing University this year to get a BA in International Relations. I don’t have a clear picture yet about the plan of study, but I’m following my feeling and the suggestions of others. I think I will be able to study and to focus on chess at the same time, but of course I will have to find a way to balance both.

AK: Is there a chance that you will return next year to play more chess in Thailand?

HY: If the timing of the tournament fits my schedule and if some other arrangements are fine, then maybe I will come back. I hope in the future I can return to Thailand again because I would like to experience more.

AK: Thank you for this interview. It would be great to see you again next year.