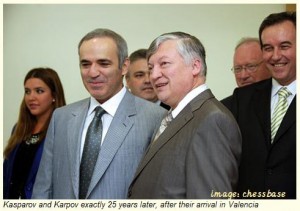 One of the greatest rivalries in the history of chess has resumed as Garry Kasparov takes on Anatoly Karpov in the Spanish city of Valencia. The 12-game rematch is taking place 25 years after the two chess legends first competed for the world title.

The event is being broadcast live on Valencia’s regional government website (www.gva.es), with organisers expecting millions of chess fans to tune in.

Kasparov, now aged 46, has been preparing for the clash by training in Norway with teenage prodigy Magnus Carlsen. Kasparov has described the match as “a ceremonial tournament”. Meanwhile, Karpov, 58, has been sparring with a computer and a group of grandmasters from a base on the Spanish coast. The Valencia tournament comes 25 years after the two grandmasters – then both representing the Soviet Union – squared off for the first time for the world crown.