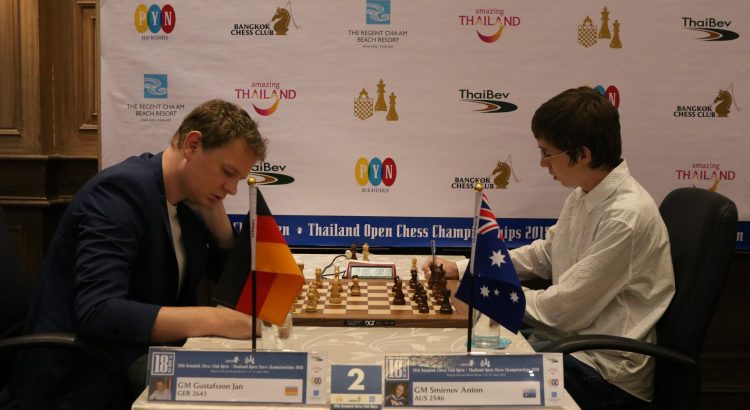 Round six of the Bangkok Chess Club Open being played at the Regent Cha-Am Beach Resort from 13-21 April 2018 might be the defining moment in tournament that has already it’s share of upsets!

On top board, top seeded Armenian GM Hrant Melkumyan turned back the challenge of the highly regarded Vietnamese GM Tran Minh Tuan, while the quietly impressive Australian GM Anton Smirnov won in no time at all after German GM Jan Gustafsson blundered in the opening.

Melkumyan and Smirnov are joined on 5.5/6 in in a tie for first to third places by Indonesian FM Novendra Prisamoro who again showed his quality in his quick win against Australian GM Ly Moulthun. The young Indonesia has long met the requirements for the International Master title and is expected to soon become his country’s next grandmaster.

India’s GM Deepan Chakkravarty J could not convert his pawn advantage against Argentina’s GM Diego Flores but USA’s GM Timur Gareyev had no trouble in takIng the full point against 2104 rated Indian Panda Sambit, results that left all three GM’s on 5/6.

Joining them in a tie from fourth to ninth place are winners on four points going into the round and they are Singapore IM Kevin Goh Wei Ming, Indonesian FM Pitra Andyka, and Indian Vatsal Singhania.