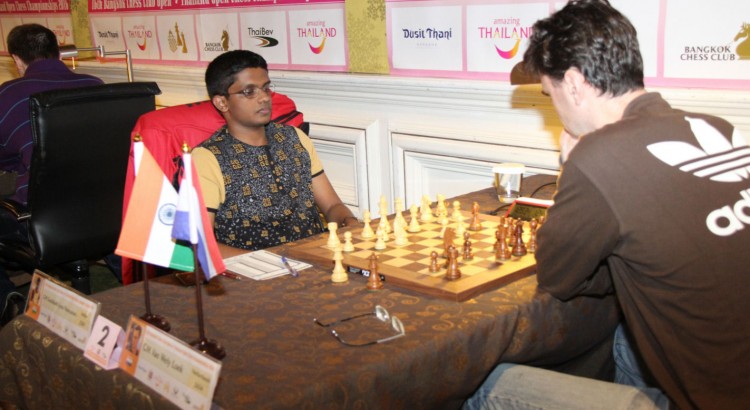 Van Wely, a keen cyclist, moved ahead of the peleton because top seeded Spaniard Paco Vallejo was held to a draw by van Wely’s compatriot Benjamin Bok in a less-than-riveting 15 move encounter.

Vallejo and Bok join a pack of five players just half a point behind van Wely, including fellow Grandmasters Jan Gustafsson and Dhopade Swapnil as well as little-known Chinese giant-killer Nie Xinyang. 15-year-old Nie, who had defeated Grandmaster Gerhard Schebler in the previous round, continued his good form with a convincing win over Australian 13th seed Anton Smirnov.

Thai hopes were riding on the shoulders of Boonsueb Saeheng but the Bangkok veteran saw his title hopes dented when he erred badly against another veteran, former world title challenger Nigel Short.

Over 300 players from more than 40 countries are competing in the Bangkok Open and Challengers tournaments, held in the centre of Bangkok at the Dusit Thani Hotel.

Round 6 of the Bangkok CC Open begins on Thursday at 2pm at the Dusit Thani Hotel and offers free entry to spectators.
The competition concludes on April 17.