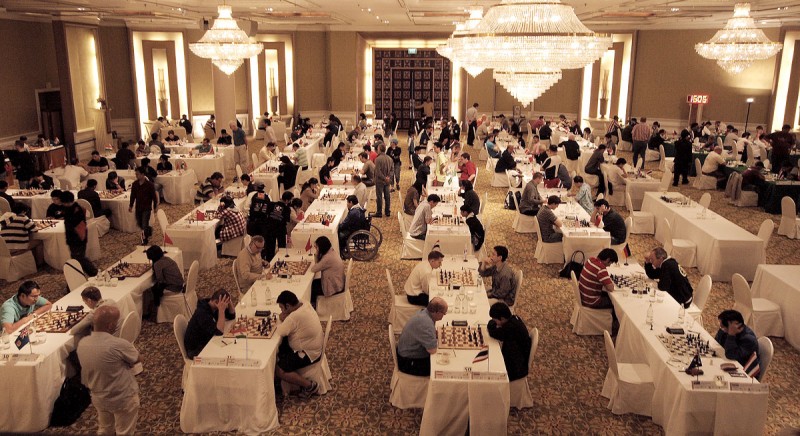 Thailand is celebrating its joyous and rowdy Songkran Festival when Thais and tourists throng in the streets and splash each other with water to cool off from the fierce summer heat. A popular location to “play Songkran” is Bangkok’s Silom District where the Dusit Thani Hotel is hosting the 12th Bangkok Chess Club Open 2012. While the crowds go wild with buckets of water outside the hotel, the competition inside is more restrained but heating up. The tournament’s top seeds, GMs Nigel Short, Hou Yifan, Jan Gustafsson and Farrukh Amonatov won their round-two games in convincing fashion. Surprises included draws between Chinese GM Xiu Deshun (champion 2008 and 2009) and Burmese Sie Thu, as well as German GM Gerhard Schebler and Thai FM Boonsueb Saeheng.

An interesting position arose on board two. Australian FM Tim Reilly with the white pieces had been playing a solid game against the defending champion GM Jan Gustafsson, but then he took a “poisoned” pawn with 28.Bxa7:

I asked a cheerful GM Farrukh Amonatov: “How did the game against IM Mohota go?”

FA: “I had a small advantage but the position was difficult to play. My opponent got into time trouble and didn’t play well then, so I got the win, but if she had more time I could not have won easily.”

AK: “How did you come to play at this tournament?”

FA: “I signed up for it just a few days before the start because my wife and I have been staying on Koh Samui for four months and the tournament organizers invited me. I’m from Tajikistan but actually live in Moscow. As you know in Russia it’s quite cold sometimes, that’s why we come here. Many people from Russia love to come to Thailand for the warm weather.”

AK: “Since you are participating in the BCC Open for the first time, what’s your impression of the tournament and how do you think the further competition will unfold?”

FA: “It’s very pleasant to be here and the conditions are truly great. As far as the games are concerned, I don’t know whether I can compete with the other GMs because I haven’t played much in the last six months. That’s why I don’t think much about others and just want to play as well as possible.”

BCC President and Chief Organizer Kai Tuorila is satisfied with the second day of play and glad that the Challenger category also got off to a strong start with 95 players, including a great number of youngsters, making this edition of the BCC Open the best-attended so far with a total of 230 players. The top seeds in this 7-round under-2100 Elo contest are S. Bharath (IND, Elo 2074), S. Raghuraman (IND, Elo 2069) and FM Manish Hamal (NEP, Elo 2056). Since in the first round S. Bharath already dropped half a point against Kyz Llantana (PHI, Elo 1672), this group promises interesting battles and upsets too.